Today I thought I would try out some more bread making.

This first one was a sour dough flour with water and oil  It rose a LOT; what you see is the top halves of the loaf.  The loaf had to be divided from top to bottom because it got jammed in my glass tray when I tried to get it out.  Yes, I oiled it, but it grew so much that it went over the rim.  At any rate, next time I shall use some cooking paper to prevent that from happening again.  Oh, and this particular loaf was done by starting it in a plastic bag.  I just love how easy the plastic bag method is.  It truly is amazing.   I also noted that it became a lot more fluffier if left to sit and rise longer.   Perhaps the extra kneading also helped { the removal of all the gases }.  Either way, This is a sure winner. 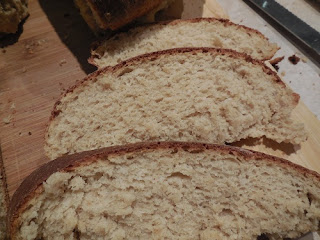 While I was experimenting with the above loaf I made the following one as well.  It differed by adding milk instead of water; butter instead of oil, and I also added an egg.  It came out much smaller - still quite good for a bread though.  It was also sweeter to taste even though they both had the same amount of sugar / yeast in there.  This loaf was started in a pot on the stove with all the little ingredients being added and the yeast ignited - then left for 10 mins, after which I then added the flour before leaving to sit for an hour, in the pot no less. 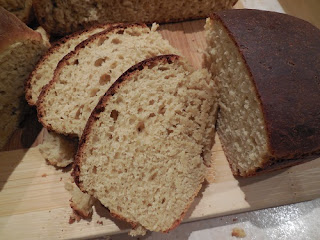 I think my oven cooks at a high temperature and I will be sure to lower it just a tad for the next round.