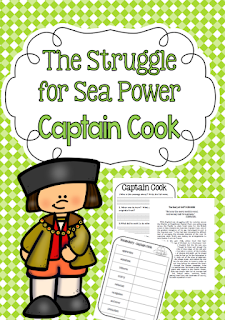 Every now and then I think it good for a homeschooling parent to actually do a lesson or two from their children's workload.  In this particular case I was modeling outlining of a passage and then on a new fresh day, an essay, without consultation to the original passage.  All in all, I see the superiority of what an outline can do for a student.  Here is what I produced:

Cook, like most men of fame, actually started life entirely disadvantaged.  He was surrounded by a culture of hard work for little reward and poverty.  It is often observed that the absence of luxury is the pivotal force on which drive and motivation fix itself.  He was brought up in a struggling colony, an Englishman in England.  Who were to guess that this boy would some day sail the Pacific Ocean and become the greatest navigator of his time?  Yes, that in due time he would come to be noticed through his hard work, trustworthy nature, and for being able to follow orders well.  Soon he had ascended to a very fine role where he had been entrusted to survey great coast lines.  This line of work, in due time, would raise him higher than his common man.  His diligence and laudable work ethic would pay him dividends.

James had been born in England in 1728 to very humble parents.  He had been apprenticed at 13 as a shopkeeper near Whitby.  He really didn’t like the job, in fact he found it to be extremely distasteful to his personality.  He had little choice in the matter.

James knew about sea life though.  He would often dream about going to sea.  He had heard many stories and tales.  This gave him a good understanding of salt junk, about the foul water that they all drank, the brutality and violence committed by the men on board, the diseases and death that marked and numbered them all, but this knowledge did not stop him from desiring to go to sea.  He had an inner calling that was so loud within his person, that he must obey it, that he must go, and that life on sea would be his work.

One quiet morning, before the daily crowd and throng of people began their usual routine he gathered up all his belongings, which wasn’t much as it all fitted in a small rut sack and stole himself away at daybreak.  He told no one of his intention for fear that he would be restrained.

He was very soon taken on board a ship, a collier as a ship’s boy.  His new adventure was coming alive before his very eyes.  He would now go to sea.

Due to hard work he soon became noticed and entered into the king’s service through the Quebec campaign.  This was a great turning point in his life.  He became acquainted with many courageous men amongst the limited fresh water, the contrary winds, the difficulties with fresh food, the horrendous outbreaks of scurvy.  At any length, these matters he discovered would soon bring expeditions to premature ends.

At last a new expedition arose.  The command had been given to Cook.  He had risen amongst men to an important position, full of responsibility and great accountability.   His dreams were now completely in his hands to explore and bring to life.  They gave him 94 men and food for 10 months.  He quickly sailed from England in a stoutly built collier called the Endeavour to explore the Pacific Ocean.

At this time it is to be noted that Australia was still an unknown land, even though Tasman had discovered the continent 130 years before.  No white man yet lived there.

So Cook sailed on, around Cape Horn, crossed the Pacific Ocean, to the east coast of New Zealand.  New Zealand consists of 2 islands and here he stayed for 6 months while he examined their shores.  He chartered the coastlines and ran excursions to the shore and inland where they would look for local flora and fauna.  After their stay they sailed northwest.  It was a particularly long journey of 1000 miles until he had reached ‘the great southland’ of Australia.

They had come to an eastern shore of Australia and in want of a name he decided to call it New South Wales.  They anchored 5 miles south of Sydney in a bay that he called Botany Bay.  It was much safer to anchor in the bay where they would have some respite from the travailing winds of the ocean.

Soon it was realized that the discovery of Botany Bay would solve a major social problem that England had been having for many years.  They decided that it would make for an excellent destination for convicts.  Not only convicts, but would also allow for new settlements, for both convicts and free men.  Thus a new settlement would be soon arranged, drawn up and established.

At length it was time to return back home to England.  They had been away for many months.  So they sailed northward of Australia, travelling over 2000 miles.  Disease and death had made its abode with them and overtaken the crew.  Upon its arrival in England the Endeavour was more like a ghost ship of members passing from this world to the next in its very corridors.  While Cook had mastered navigation, he had clearly not mastered scurvy.

Cook soon had another command the following year and was given the Resolution to sail.  He was given orders for his continued exploration of the southern hemisphere.  We must also remember that England is situated in the northern hemisphere.  These voyages were very far away from home.  There was a chance that they may never make it home again.  His first voyage had great advantage and success, so too would his second voyage.

He left England with 100 men, and rounding past Cape Hope again but this time he stopped for food.  In particular they took on beef, mutton, bread and vegetables.  While there he received word and report of another expedition, similar to his own, that 150 men had died of scurvy.  Was there no way to remedy this villain?

Back in the ship with morale not as high as it could have been they sailed on.  They sailed southwards.  One night a fierce and unforgiving storm rose up and blew them off course.  It had carelessly deposited them amongst the enormous ice-lands.  As they sat there shivering from the cold he reflected upon the danger they had just escaped and now found themselves in.    Their minds were filled with horror.  Their hearts were filled with fear.  The storm had been so violent that they had come very close to death itself.

Again, Cook sailed on.  They sailed for many weeks.  He had a great responsibility for the command of the ship but also for the souls that were on board as well.  They searched for land, but the cold was bitter and the ropes for rigging frozen.  The decks sheathed in ice.  The only thing they found was frozen water.  The cold had even frozen the little piglets, fresh born, on board the ship as well.

At last they sailed to New Zealand.  They had now been at sea for 100 days and saw no land.  Upon seeing the land their hearts rejoiced and their hopes increased.  Amazingly they all still had their health.  Cook was finally onto something.  He was beginning to conquer every sailor’s wicked enemy, scurvy.  He had been particularly careful and diligent with the food that they had eaten.

A happy sight awaited them with the discovery of new islands.  Of course they claimed them for England.  They now had on the books the Friendly, Society, and Sandwich Islands.  A gift to England upon his return.

In due time they returned safely home again.  He had done what no other navigator had done.  He had circumnavigated the Antarctic Circle.  The Resolution was still intact.  The men were in good health.  He had made their health a high priority and had, by example, lead them to eat well to maintain their health.

Upon his return to England the second time Cooks fame increased greatly.  He was able to publish his accounts of his voyages for the common man to read.  It ignited a healthy and curious interest amongst the people of the far away lands that he had reached.  They heard of strange new things like coral reefs, palm trees, bread fruit, tattooed warriors from New Zealand, gum trees, kangaroos and koalas.  He had opened up a whole new world to Englishmen.

The earth had plenty to discover, and now it was all at the fingertips and available for any courageous man brave enough to reach out and touch it.

Now, finally, Cook had made a grand name for himself.  The history books would make him a legend.  He had built his name upon the thrashing waves of the Pacific Ocean and the lands that he came to set foot on.

Sadly, our hero navigator ends his life in a strange island while away on yet another expedition.  He was speared through by an indigenous native and died as a result of the wound inflicted.  He had been a stern sailor, like a father to the men entrusted to him.  His face and naval career had been set southwards and its seas and lands had welcomed him.  Though hunger, cold and monotony had plagued him, he got the upper hand.  His calling and heart’s desire drew him on, steered and steadied him to the fame he now holds still.

Should you like to attempt the very same lesson or give it to your children I have it in the store for a bargain $1.50 HERE.   It doesn't actually teach outlining, but it does provide the passage on which to outline.

Thanks so much for reading.
Posted by Deborah at 12:59 PM