The temptation to resume school a week earlier has certainly been high in my mind this week, but since I really do want to give the girls a good rest from their academics I decided to relax a little myself and made a card for some fun.

I know, it's been like forever since I made a card~!

To my surprise, I even found a stamp that still had it's shop backing on { Australian Tilda }, meaning that I have never used it before.  Crazy.  How long has it been sitting there - never used?  So that's what I used today.

Everything was kept super simple - just so that I could complete it.  What was even more astonishing is that I managed to get it done without an entourage of little girls in tow. 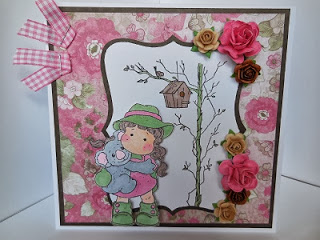 I also used some little flowers.  I'm always a bit scared to use a lot of flowers, but I think that when one uses that type of thing, it probably is best to use a LOT of them.  I think perhaps that I could of gotten away with adding quite a few more even - giving it a much more fuller look. 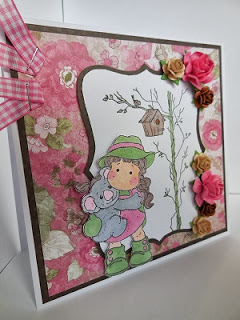 I found some nice paper to add as well.  Always a bonus. 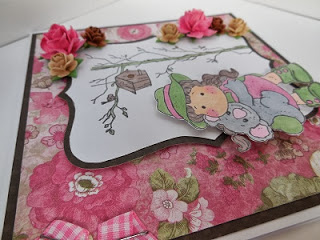 My only real regrets were not making the ribbon a little longer and in a little more on the page.  The coloring of her hands as if they were wearing a mitten, I should of left it as a skin color instead.  Lastly, perhaps I could of put a little blue sky / clouds on the white - maybe. 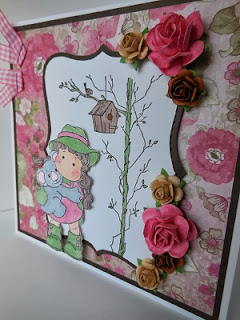 Overall, I still think that it came out ok.  Something nice to pop up on display until I make another one. 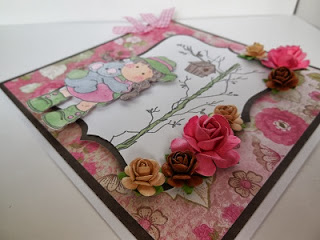 Thanks for visiting.
Posted by Deborah at 3:10 PM

Email ThisBlogThis!Share to TwitterShare to FacebookShare to Pinterest
Labels: Cards