A while ago I bought a nice little collection of books from a series called 'The Imagination Station'.  In each book a pair of children travel through time and get a glimpse of something of that timeline.  This year I've started reading them aloud to all the girls.  So far we've done the first four of them.  They are quick and easy to read and I usually space them out over a period of two days.  They're written at a Grade two level, so if you don't want to use them as a read aloud, you can just have your child read it for themselves.  { I originally bought them for Chloe who was 7 at the time for her to read to herself. } 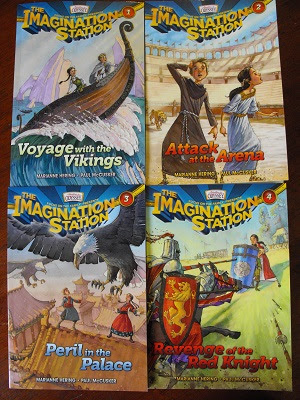 1.  Voyage with the Vikings

Join cousins Beth and Patrick as they travel back in time to Greenland circa 1000 to find a Viking sunstone! While visiting Whit's Soda Shoppe, the cousins find a mysterious, old letter in Imagination Station asking for Viking sunstone; if the sunstone isn't found then someone named Albert will be imprisoned. Beth and Patrick race through time, meet the Vikings Erik the Red and Leif Eriksson, and locate the sunstone.but when they return to the Soda Shoppe another note is waiting for them requesting a silver goblet. 96 pages, softcover from Tyndale.

The adventure continues! Join cousins Beth and Patrick as they travel through time to fifth-century Rome to locate a missing silver cup. After returning to Whit's after finding the Viking sunstone, another letter is left this time requesting a silver cup that belongs to a monk. If found, this cup may prevent the mysterious Albert from being imprisoned.
Emperor Honorius is hosting a gladiator battle at the Roman Colosseum in honor of a war victory. Beth attends as a slave and Patrick attends as a monk's apprentice, until he is taken prisoner and sent to fight in the arena. While in Rome, the cousins meet Telemachus, a monk that believes fighting is wrong and who is willing to give up his life to stop the killing.
When Beth and Patrick find the cup and return to their time, a new letter is waiting for them with information on the mysterious Albert's fate.

The place?-China in 1271. The quest?-the golden tablet of Kublai Khan. The problem?-just about everything!
The Imagination Station adventures continue as cousins Patrick and Beth are kidnapped by Mongol warriors. Only the friendship of fellow traveler Marco Polo saves them from harm. They are brought to the Mongol palace where the Kublai Khan dislikes both their gifts and their message about Christianity. The tension grows when the Mongol magicians challenge the cousins to a spiritual power showdown. As war breaks out, Beth and Patrick are locked in a secret room to prevent their escape.
How do the cousins get the golden tablet they needs to save Mr. Whittaker's friend Albert? How do they escape the city and find the Imagination Station? Ever the perilous palace and find out!

4.  Revenge of the Red Knight

In this Imagination Station adventure Patrick and Beth find themselves as guests in a beautiful castle in 15th century England. Through a series of events, the steward of Lord Darkthorn's castle finds the cousins with three artifacts collected in their previous adventures: the stone, the cup, and the golden tablet. They are accused of being thieves and locked in jail. Beth escapes and discovers the identity of the real thief, leading to a jousting contest with a surprising outcome.
Set during the War of the Roses in England, Revenge of the Red Knight will teach readers about the Crusades, the integrity of knights and the vows they took, and why men would choose to risk their lives to fight for Christianity.

You can purchase these from Christianbook.com for $4.49 each.

This week I'm joining up with my friend Chareen from Every Bed of Roses for her book linky: 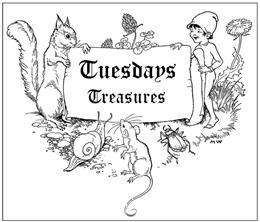 I hope you will join us.