Do Tell About the Greek

As you all know, I've added New Testament Greek for the girls to our classical homeschool program.  This will be my second time around { remember the boys 7 years ago } - so I think that this time I will feel much more relaxed.  I also feel that if we are going to have do Languages { LOTE } and we do Latin, well, we should also be doing Greek - and not just any Greek either, but rather, New Testament Greek because that my dear friends, will keep us learning of God, His Son, and how we should frame our lives and knowledge.  Not to mention that I have on occasion come to a deeper and clearer understanding of particular things by reading from the Greek.  True story.

If my memory serves me correctly I did attempt to start Chloe with Greek when she was in Grade 1 { two years ago }, but it didn't really work after we got through the alphabet.  The alphabet was fine, but it was all the vocabulary and conjugating that threw her - clearly she wasn't ready for it.  I am hoping to make a bit more progress this time.

Now, before we continue through with my show and tell I'd like to do a quick little detour as I would love to share this little quote from the the mind of Winston Churchill who said,

“[B]y being so long in the lowest form I gained an immense advantage over the cleverer boys. They all went on to learn Latin and Greek and splendid things like that. But I was taught English. We were considered such dunces that we could learn only English. Mr. Somervell -- a most delightful man, to whom my debt is great -- was charged with the duty of teaching the stupidest boys the most disregarded thing -- namely, to write mere English. He knew how to do it. He taught it as no one else has ever taught it. Not only did we learn English parsing thoroughly, but we also practised continually English analysis. . . Thus I got into my bones the essential structure of the ordinary British sentence -- which is a noble thing. And when in after years my schoolfellows who had won prizes and distinction for writing such beautiful Latin poetry and pithy Greek epigrams had to come down again to common English, to earn their living or make their way, I did not feel myself at any disadvantage. Naturally I am biased in favour of boys learning English. I would make them all learn English: and then I would let the clever ones learn Latin as an honour, and Greek as a treat. But the only thing I would whip them for would be not knowing English. I would whip them hard for that.”


I don't know if that is a case for a formal GRAMMAR or a case against Latin and Greek unless you have your grammar all top notch.  * smiling wide here *  I am also wondering if he was taught the progymnasmata or anything of the like.  I have heard the quote about letting the clever ones learn Latin, and Greek as a treat before, but it was a bit of an eye opener to read it in context to his whole paragraph.  Either way, it encourages me with all three subjects; Grammar, Latin, and Greek. Never mind, I've digressed enough, and it isn't as interesting as my show and tell to come.

So, I think that I had BETTER get to my point for todays post, as it was to do a little show and tell on what we are using for New Testament Greek.  Let's get to that, shall we?

{ Elementary Greek by Christine Gatchell }
Year One - Text and CD 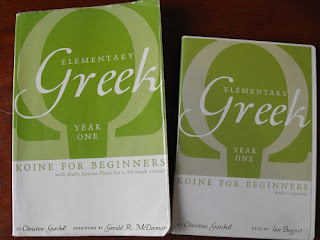 A sampling of a lesson inside.

Several memory verses are taught throughout the course in an incremental manner, and I really like that.  Vocabulary is served 5 words a lesson, each lesson lasts a week. Small enough lists not to tax a child.  I really like that too. 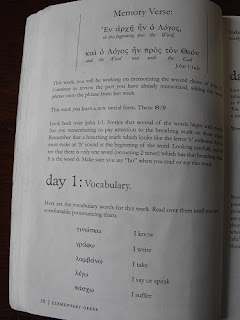 Grammar is also included.  They only give what is needed, so that is another plus. 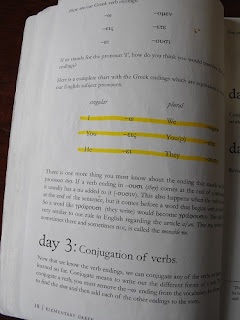 A sampling conjugation of a verb.  { Lesson 4 }  If you look closely you can make out my pencil markings separating the root stem ( verb ) from their endings ( pronouns ). 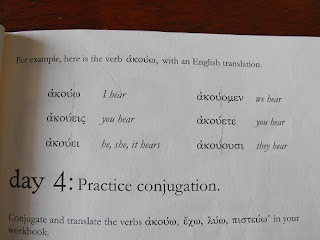 The course also includes flash cards - alphabet.  The letter on one side, the name on the other. 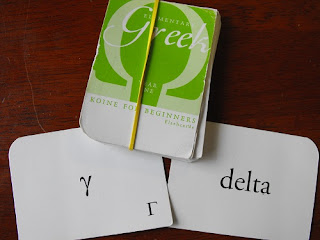 More flash cards - the word on one side, the definition on the other. 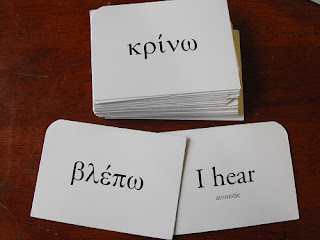 I do have to mention that there is also a workbook available as well.  I have one somewhere, half used no doubt.  I don't plan on using it though.  Not yet, anyway.  Mostly because less is more { at this age }, and slow and steady wins the race.

There are an additional two levels for this course.  So there's plenty to keep your primary student busy for a few years.  After that you can jump a child to Mounce or Wenham.  Or if you're game, you can try an old time version for FREE from Textkit.

Additionally, please allow me to add one more tiny little thing; I hear on the wind of the internet that a new Greek course is on it's way by a different company - which, if their current materials are anything to go by - we should be absolutely delighted when it is made available.  Just between you and me, I can't wait!

In the mean time the alphabet is making a lovely introduction to the course.

Do you study New Testament Greek?

Today I am linking up with:

I hope you can join us.