Wow, a LOT has been happening in the last 6 months.

Charlotte the baby is now 8.5 months old and crawls everywhere.  She even gets up on her knees in a standing position and it won't be long before she's on her feet and walking.  The first year just goes so fast.  I have to watch her like a hawk though because she puts so much stuff in her mouth and with the amount of people in the house it is easy to overlook fallen food items etc....  It is straight out scary of what I have found her munching on. 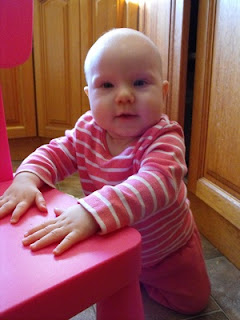 The biggest change to the family has been that my grandchildren have come to live with us.  My daughter has also come home.  It's a super long story, but yeah, that's the shortest version I could give you. 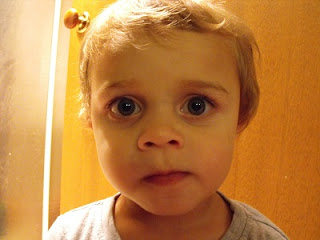 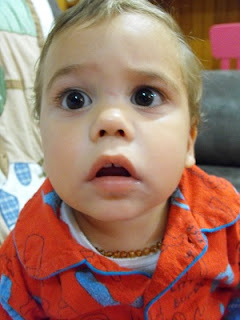 So the last 6 weeks have been FULL on with re-adjustment with adding the two boys.  It has been hard going.  Some days very difficult.   There are huge behavioral problems that are struggling to be addressed, but we keep on, looking at the end goal which is to have the boys returned to Michelle.

While I'm on behaviour, I must mention that Hannah decided to give herself a hair cut.  It was bad.  Remember when Chloe and Phebe did that?   Well, instead of trying to fix it with a number 4 I just left it this time.   So she still has some hair.   We gave her a couple of beanie hats to put on to cover it up.  We also had a bit of regression with bed wetting with Hannah as well, but it has quickly gotten back to normal.

In some ways dinner meals have gotten easier because I'm cooking bulk at lunch time so we have a second meal available at dinner time.

We continue to homeschool.     Chloe is doing well with her grade 2 work and Phebe is picking up the pace in Grade 1.   Hannah has started looking at her alphabet.

Due to the current circumstances I haven't been able to leave the house with hubby for the last 6 weeks.  In fact, I think I've only left the house about 3 times in all that time.  The boys MUST be in attendance with either hubby or me and because of seating arrangements, there just isn't the room for us all to go out in the landcruiser.   I am hoping that we get a bus ( toyota hiace ) soon.  Hubby has gone for a day trip to Melbourne today to inspect some buses.

Here are the girls this morning while it was day break - cold and dark outside.  Ready for their trip to Melbourne. 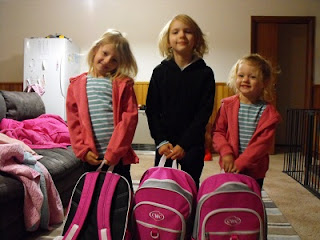 Email ThisBlogThis!Share to TwitterShare to FacebookShare to Pinterest
Labels: Girls