Phonograms - Review Them or Lose Them

Sometimes I like to change things up just slightly to make the old and dull into new fun.  As it turns out it would appear that a new face totally reignites interest.  Who knew?

So, this is exactly what I did a few weeks ago with our multiple phonograms.

But first, let me back track.  As the year had progressed I'd let off a few things that we'd spent time on like flash carding the multiple phonograms.  It seemed as if the girls had a pretty good grasp of them and that I could relax.  Well, so I thought.

The girls still read, so all good there.  However, I did start to notice that when new vocabulary was being introduced that they weren't picking it up as quickly as I had thought that they should.  If they had actually known and were able to recall all their phonograms they would of been flying through the new vocabularly like super stars, but they weren't, they were limping.

Then randomly one evening I decided to do a spontaneous on the spot quiz to see what they remembered.   Wow, was I ever shocked.

I had discovered that the girls had lost some of their phonograms since I had stopped drilling them.  I only covered the 44 multiple phonograms and here were their scores:

Oh my poor Phebe!  How I lament at your loss and limitation - poetic license allowed { and Chloe who wasn't that much out in front }  I have seriously got to get real and spend those extra minutes with you.  My dear middle school girl, perhaps you have fallen through the cracks of too many students and not enough one to one time.  Note to self:  I guess that's what happens when you have a lot on your plate and life is so exciting that you don't always do your job as thoroughly as one should.  I am the first person that should know:  do the job properly the first time so you don't have to come back and do it again.  And how is it that a 4 year old remembers more than an 8 year old?  Shhhhh, I'm not saying this one out loud.  I don't want the girls to hear my thoughts, but yeah, in my mind I'm asking this.

First, I either hadn't done a very good job to being with.  { I didn't really stop to dwell on this point because I do know how to teach phonograms. }

Secondly, they hadn't committed them to memory the way I had hoped that they did. { Are their brains defective? }  No, that couldn't be it, they learn all sorts of things, and function well for their ages.

Third, perhaps I had left off before they had really got them stuck in their brains.  { This would be the most logical conclusion in my mind. }  I should have taken the time to REALLY make sure that they knew them all - and that they knew them so well that they wouldn't forget them.  But no, I had to rush on to other things.  Always trying to get to the next thing in a hurry, and now look, I look poorly, they look poorly, we all have lost face.  { I might have lost less face if I didn't tell you about it.}

Any and all ways - I now recognized that I needed to go back and do some more work.

Cowboy theme walk in.  Colorful cowboys and cowgirls no less.

Yep, so I thought that it would be a neat idea to go back to the phonograms with a cowboy twist to it.  So I whipped up the 44 multiple phonograms like this: 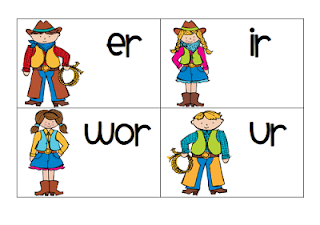 Then my printer, laminator, and guillotine all came out and went to work.  :o)  I tell you what, they are very handy friends to have indeed.  Especially for when you get those must have paper ideas.  Would you like to meet my friends one day?  I think they'd be up for a photo interview for the blog.  Their friendly that way.

The remaining problem is that I shall have to continue with review - for some time I should imagine.  You know, just to be sure, and you never quite know, it may also give birth to a new theme somewhere along the line.  I dunno, maybe with a froggy theme, or other suggestable themes that I might be able to swing.  *wink*  { If they don't get them all mastered sooner than later that is. }

In reality I know that I'm not the only one who has walked this road.  So that is some comfort.  It's just one of those familiar learning journeys, and while I'm not really a stranger to this type of thing, I don't really mind the extra review when it all gets down to it.  I sort of like it.  In addition, to be totally truthful, it would indeed be a rare thing if I did not need to cover the phonograms again with at LEAST the 4 year old.

Email ThisBlogThis!Share to TwitterShare to FacebookShare to Pinterest
Labels: Phonics